Jack, here, with the continuation of our Monster Month and a follow-up to the first part of Creatures of Crowfall.

In case you missed out on part one, here’s an overview of the basics: A vessel is a body that your Spirit Crow inhabits which allows you to explore the world. To learn more about vessels, take a look at our Crows and Vessels FAQ. When a vessel is created, its Race is chosen, and that vessel receives a permanent Racial Runestone. This Runestone contains all the attributes and skills that apply to that particular Race.

Along with attribute modifications (such as increased Constitution or Dexterity), each Race has a unique Racial Bloodline Passive, a dodge, and a number of other exclusive powers.

The Racial Bloodline Passive acts as a free passive — that is, you don’t have to expend one of your limited passive skill slots to use it and it’s automatically granted. These passives are thematic to the vessel’s Race (for example, the Centaur can move more quickly and the Minotaur is harder to stun).

An important goal of ours is to make sure our Races all feel different when you play them. The sheer variety of choices, along with the different Classes and the addition of a vast array of Disciplines, makes for enormous customization potential.

Without further ado, let’s look at the rest of the Monster Races! 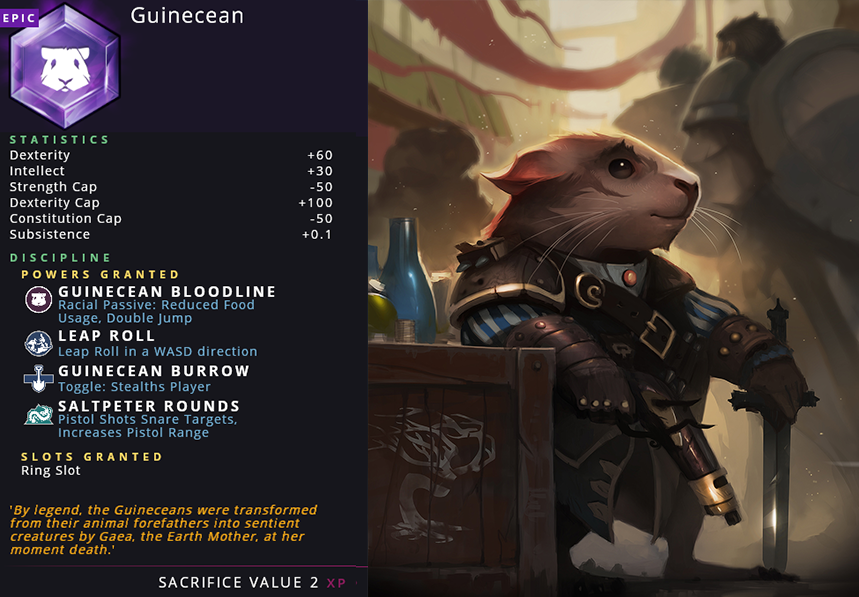 GUINECEAN
In ancient times, it is said, the Guineceans were simple forest animals. At the moment of Gaea’s death, she bestowed on them intelligence, sentience, and emotion. They call this blessing “The Gift” and it informs much of their lifestyle. Guineceans tend to be good-natured and welcoming. Their lives are highly social, and they work together to excel in science, engineering, and exploration. They are so advanced that they have been the only Race to master the alchemical compound for gunpowder and, in turn, the use of pistols. They delight in meeting other cultures and are acknowledged throughout the known worlds to be as powerful as they are diplomatic.

Being small and quick, their Guinecean Bloodline Passive gives them a bonus to their Dexterity along with the ability to double jump, and they require less food than other Races to remain full. The intelligence given to them by Gaea also grants a boost to their Intellect.

Guinecean Burrow allows you to burrow under the ground and become invisible to your enemies at the cost of slowly draining your stamina. Saltpeter Rounds imbue your Pistol attacks with a chance to slow enemies and increase your own distance bonus.

A highly-civilized Race, they can wear one additional ring, bringing their limit up to three.

Three Classes are available to Guineceans: Knight, Cleric, and Duelist. Despite their size, they are versatile and excel in all three available roles. They are unique in that they are the only Race able to take the role of Duelist. 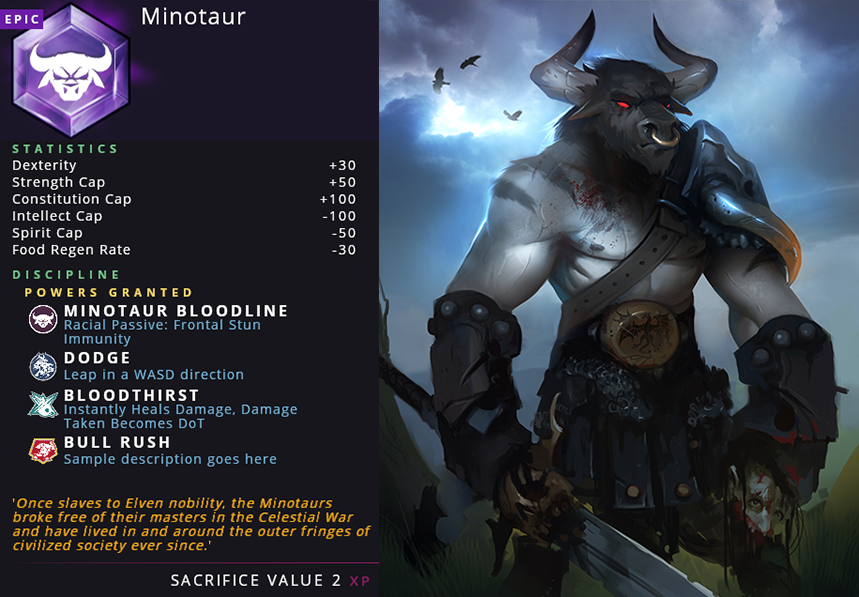 MINOTAUR
Born of a bitter vendetta between gods and a thirst for vengeance, Minotaurs are a Race as brutal as their creation story. For eons they were kept as slaves to noble Elven families; used as guards, pack animals, and entertainment. But during the Celestial War, they broke free of their shackles and grabbed hold of freedom. They are a ruthless, merciless Race known for the ferocity of their warlords and the cruel strength of their warriors.

They receive a boost to their Dexterity, although they also consume food at a higher rate than some other Races.

The Minotaur Bloodline Passive makes use of their tenacity, granting full immunity to all Stun effects that strike you from the front.

Their Racial dodge is unique in that you will cause damage to nearby enemies when you leap.

Bloodthirst sends you into a frenzy which recovers half of all health lost for a brief time. When the bloodlust ends, you suffer a crash and lose some of that recovered health. Bull Rush sends you charging forward, damaging nearby enemies and dragging them along with you.

Excelling when combat is up close and personal, three Classes are available to Minotaurs: Ranger, Champion, and Myrmidon. 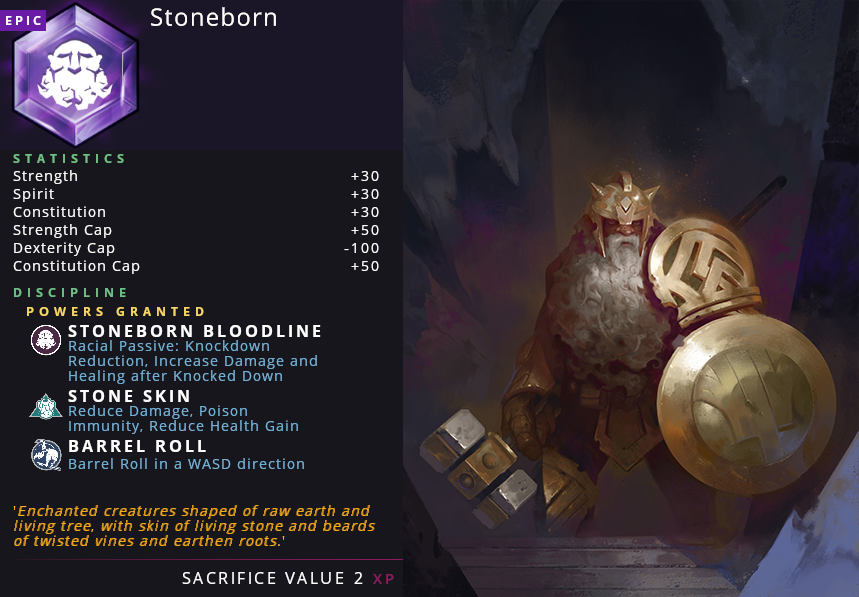 STONEBORN
The younger Races call them “Dwarves”, a misnomer when their height and width are taken into consideration. The elder Races — the Fae and Elves — call them by their true name: Stoneborn. The Stoneborn are the first of the Races, shaped not from flesh and bone but from living stone and twisted tree root. They were crafted to tend the fires at the heart of every world, to carve channels through which magma, the blood of Gaea, might flow and warm the earth.

They gain a boost to their Strength, Spirit, and Constitution stats, exemplifying both their hardiness and their connection to the gods.

The Stoneborn Bloodline Passive grants you a significant reduction to the duration of any Knockdown you suffer, and any Knockdown grants a bonus to both your healing and damage output.

Stone Skin immediately cures you of all poisons and increases your damage mitigation at the cost of decreasing incoming healing for the duration of the buff.

They are a tough Race of brute force, and their Class choice reflects this. They can choose from Knight, Champion, Myrmidon, and Cleric.

TL;DR
That concludes our overview of the Monster Races available in Crowfall! Let us know which is your favorite (and what Class you like to pair them with) on the discussion thread. See you in our next monstrous update.