Jack, here, and to start off our Monster Month month I’d like to talk to you about the Monster Races available in Crowfall®. One of the unique aspects of our design is the sheer variety of Races that players can choose from, including a diminutive anthropomorphic guinea pig or a stocky creature made of living stone!

First, the basics: A vessel is a body that your Spirit Crow inhabits which allows you to explore the world. To learn more about vessels, take a look at our Crows and Vessels FAQ. When a vessel is created, its Race is chosen, and that vessel receives a permanent Racial Runestone. This Runestone contains all the attributes and skills that apply to that particular Race.

Along with attribute modifications (such as increased Constitution or Dexterity), each Race has a unique Racial Bloodline Passive, a dodge, and a number of other exclusive powers.

The Racial Bloodline Passive acts as a free passive — that is, you don’t have to expend one of your limited passive skill slots to use it and it’s automatically granted. These passives are thematic to the vessel’s Race (for example, the Centaur can move more quickly and the Minotaur is harder to stun).

An important goal of ours is to make sure our Races all feel different when you play them. The sheer variety of choices, along with the different Classes and the addition of a vast array of Disciplines, makes for enormous customization potential.

Without further ado, let’s look at the Monster Races in more detail! 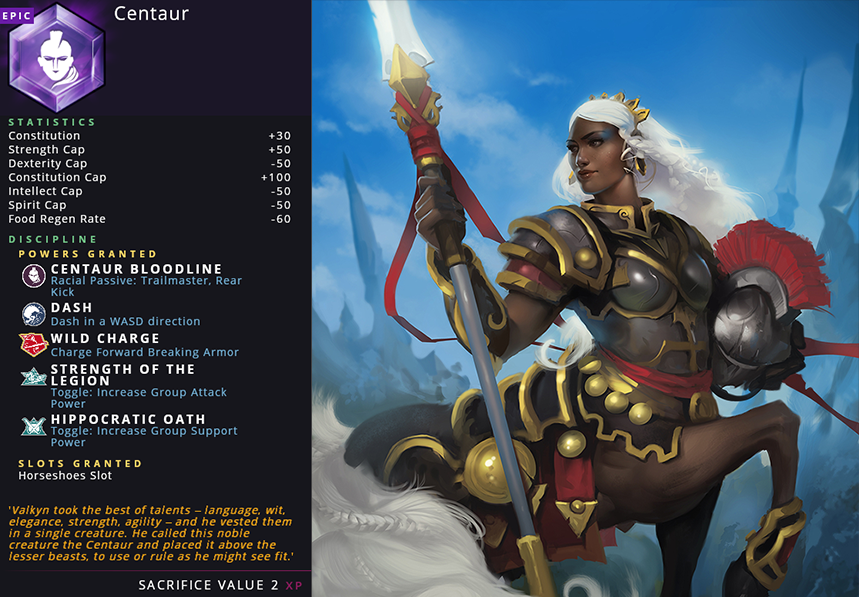 CENTAUR
From the beginning, Centaurs have been conquerors, sovereign rulers of each world they overtook. Their creation legend — which tells the story of how Valkyn bestowed upon their Race the best of all the attributes — informs their proud nature. Believed to be created as the finest of the Races, it then follows that it is their duty to rule the others. Their history of expansion might have seen them as rulers of all the known worlds had the Hunger not corrupted and consumed their home world. They are shrewd diplomats, powerful warriors, and respected philosophers.

They gain a boost to their Constitution, though their considerable size means they consume more food than other Races.

The Centaur Bloodline Passive grants two benefits. Trailmaster increases your movement speed when out of combat. Rear Kick has a chance to automatically activate when you’re attacked from behind, causing damage and pushing enemies away.

Wild Charge sends you lunging forward, damaging all enemies in your path and briefly breaking their armor. With Strength of the Legion you can increase the attack power of others in your group so long as they’re near you. Similarly, Hippocratic Oath increases nearby group members’ support power.

To round it all out, the Centaur also gets a bonus Horseshoes Slot which acts as an additional slot for boots.

Three Classes are available to Centaurs that make use of both their melee abilities and their support power: Knight, Champion, and Cleric. 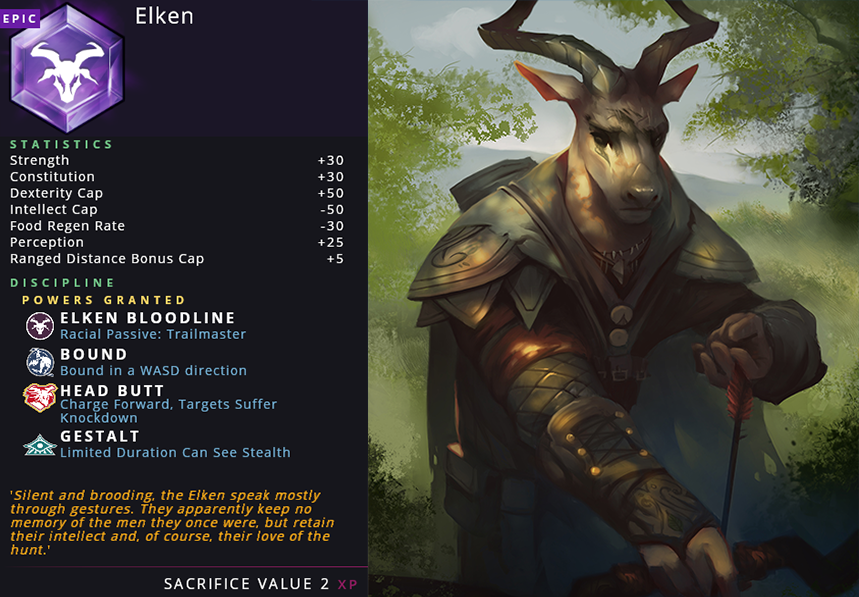 ELKEN
The Elken are a mysterious Race, known far and wide as great trackers and hunters. Silent, they communicate mainly through hand gestures. Though not directly descended from the god D’Orion, he was the first of their kind. The curse that gave D’Orion his form still hangs in the deep parts of the forest. Hunters who venture too far, and hunt too long, return from the wood in monstrous Elken bodies with no memory of who they were before.

Elken gain a boost to Strength, Constitution, and Perception stats along with a distance bonus, making them a great choice for ranged Classes.

Head Butt is an all-out charge that knocks down any enemies caught in your path. Gestalt activates an ability called Shadow Sight; this allows you to see nearby enemies in stealth, potentially saving yourself and your allies from ambush.

Being that they are such a versatile Race, five Classes are available to Elken: Knight, Confessor, Templar, Ranger, and Cleric.

TL;DR
I hope you enjoyed the first part of our overview of the Monster Races available in Crowfall! Let us know which is your favorite (and what Class you like to pair them with) on the discussion thread. Check out part two, where we discuss the Guinecean, Myrmidon, and Stoneborn.